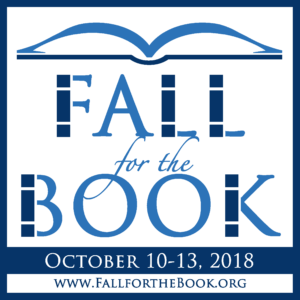 The 20th annual Fall for the Book begins this Wednesday, October 11 and runs through Saturday, October 13. What does that mean? 4 Days of readings, discussions, performances, and more by 150 authors!

The Libraries is pleased to once again provide sponsorship for the capstone event for this year’s Mason Reads program (March by Congressman John Lewis) as well as provide space in Fenwick Library for additional Fall for the Book events.

Congressman Lewis will speak at 1:30pm on Thursday, October 11, in the Concert Hall in the Center for the Arts, to discuss his memoir, March: Book One, along with his co-writer Andrew Aydin. March is a #1 New York Times Bestselling series of graphic novels, which have won honors from the Robert F. Kennedy Book Awards and the Coretta Scott King Book Awards, among many others.

In honor of March: Book One and Congressman Lewis’ visit, Mason Libraries’ team members (Joy Suh, Kim Hoffman, Teresa Kan and Westly Wright) created this story map for the community as it celebrates the Fall for the Book festival.

Two of Mason Libraries’ faculty will also be featured at Fall for the Book events. Lynn Eaton, Director, Special Collections Research Center will join a panel discussion on “The Secret History of a Modern Suburb” on Thursday, October 11 at 4:30pm in Fenwick Library Room 2001. Aaron McCollough, Interim Head of Mason Publishing/George Mason University Press will join three other poets for a reading at “Poetry Night Out” on Friday, October 12 at 6pm at Epicure Cafe.

The following Fall for the book events will be held in Fenwick Library Room 2001: