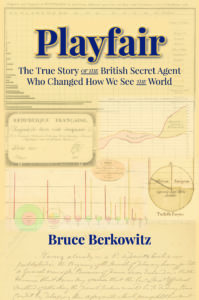 William Playfair is remembered as the inventor of “statistical graphics,” including the line, bar, and pie charts that we still use regularly today (and built into Microsoft Excel). He’s a sometime-hero of the Infogeek community. Edward Tufte cited him extensively in The Visual Display of Quantitative Information, and called Playfair one of the great inventors of modern graphical design, who created the “first time series using economic data.” (Tufte, Edward, The Visual Display of Quantitative Information, Graphics Press, 1983, 9, 32-34, 64-65, 91-92) [Source]

In the George Mason University Press’ forthcoming title, Playfair: The True Story of the British Secret Agent Who Changed How We See the World, author Bruce Berkowitz reveals a journey to uncover a truth that is often hidden, opaque, distorted, refracted by lenses of luck, fate, and personal conflicts of interest. [Source]