Fenwick Gallery at George Mason University is pleased to host “Conjuring Presence,” an exhibition of visual art and poetry featuring Mason students, faculty, and alumni. The exhibition will run in Fenwick Gallery and online from October 20 through December 11, with a literary reading and an artists’ panel to be announced at a later date.

Curated by Mason faculty member and artist Jessica Kallista, “Conjuring Presence” asks both artists and audience to think critically and examine many manifestations of presence: What does it mean to join our creativity as we co-sense and conspire together for the sake of enlivening our imaginations and our communities? What does it mean to become mindful of the need to work against erasure when we understand who is not present and why? Who decides whether some people are or are not allowed to be present to occupy spaces in the arts and academia? How do we acknowledge the past, work for a just future, and still ground ourselves in the present? How might we work to conjure presence?

The artists and poets featured in “Conjuring Presence” were paired and asked to consider these questions throughout the collaborative process. In doing the work of considering, questioning, and challenging the status quo with radical honesty and presence of mind, together they embrace the power to envision, freedom dream, and co-create otherwise worlds into existence.

“Conjuring Presence” will be on display in Fenwick Gallery and online. Fenwick Gallery is located in Fenwick Library on Mason’s Fairfax campus. The gallery is open during Library business hours; see the Library’s website at http://library.gmu.edu for the most accurate and up-to-date information.

For more information on this exhibition at Fenwick Gallery, contact Stephanie Grimm, Art and Art History Librarian, at sgrimm4@gmu.edu.

The Volgenau School of Engineering and the University Libraries would like to recognize engineering faculty and alumni authors during Engineers Week 2020, February 16-22.

Mason Libraries will add your book to the collection if you wish to donate a copy – and it is not already held by the Libraries. If you are interested in gifting your book to the George Mason University Libraries, please contact Jennifer Hamilton at jhamilta@gmu.edu. 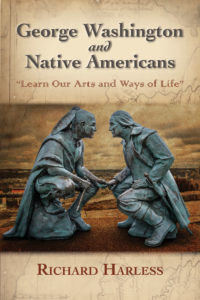 Join us for a panel discussion in celebration of the recent publication of George Washington and Native Americans, the latest from the George Mason University Press, on Thursday, April 4, at 3 p.m. in Fenwick 2001.

Richard Harless (author, George Washington and Native Americans), George Oberle (History Librarian, University Libraries and Affiliate Faculty, History and Art History, George Mason University), and Randolph Scully (Associate Professor, History and Art History, George Mason University) will discuss the complexities of this topic in American history and will include time for Q&A with the audience. Books will be available for purchase, and refreshments will be provided (courtesy of the University Bookstore).

About the book: George Washington had contact with Native Americans throughout most of his life. His first encounter as a teenager left him with the impression that they were nothing more than an “ignorant people.” As a young man he fought both alongside and against Native Americans during the French and Indian War and gained a grudging respect for their fighting abilities. During the American Revolution, Washington made it clear that he welcomed Indian allies as friends but would do his utmost to crush Indian enemies. As president, he sought to implement a program to “civilize” Native Americans by teaching them methods of agriculture and providing the implements of husbandry that would enable them to become proficient farmers—the only way, he believed, Native Americans would survive in a white-dominated society. Yet he discovered that his government could not protect Indian lands as guaranteed in countless treaties, and the hunger for Indian land by white settlers was so rapacious that it could not be controlled by an inadequate federal military establishment. While Washington appeared to admit the failure of the program, this book—a unique and necessary exploration of Washington’s experience with and thoughts on Native Americans—contends he deserves credit for his continued efforts to implement a policy based on the just treatment of America’s indigenous peoples.

About the author: Richard Harless has a Ph.D. in American History from George Mason University. He is a retired public school teacher, counselor, and coach. He worked as a research assistant at Mason’s Roy Rosenzweig Center for History and New Media and was a fellow at the Fred W. Smith Library for the Study of George Washington at Mount Vernon. He is currently teaching at various colleges including Saint Mary’s Honor College in Maryland. George Washington and Native Americans is his first book. 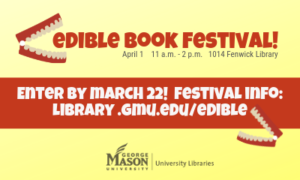 Do you like books, the culinary arts, winning prizes? Enter the Libraries’ Edible Book Festival Competition! The Festival will take place Monday, April 1, from 11 a.m. to 2 p.m. in Fenwick Library, Room 1014 (yes, we realize this is “April Fool’s Day” but this is no joke!).

Edible Book Festivals feature creative food projects that draw their inspiration from books and stories. Edible books might physically resemble books, or they might refer to an aspect of a story, or they might incorporate text. Judges select winners for an array of light-hearted prize categories, such as “Best Literary Pun” or “Most Delicious Looking.” The Festivals are a great way to celebrate both book-making culture and the culinary arts. Edible Book Festivals began with the Books2Eat website in 2000 and is now celebrated internationally.

For more details and to enter the competition, visit http://library.gmu.edu/edible. Entry forms are due by March 22. We can’t wait to see (and taste) what you create! 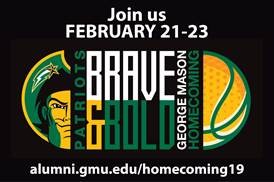