Professor Huneke’s research proposal, Visualizing Authoritarianism, is a three-part project concentrated on examining the East German regime’s visual propaganda and how it changed over time, through examination of the East German poster collection held by the Libraries’ Special Collections Research Center (SCRC). Professor Huneke will collaborate with both SCRC and the Libraries’ Digital Scholarship Center (DiSC) to accomplish his project goals: 1) migrating existing collection metadata into an Omeka S site (with the assistance of graduate research assistants); 2) conducting a qualitative assessment of the posters in the collection to augment the existing metadata and to create more nuanced descriptions of the posters; and 3) publishing a journal article of research findings and digitizing a sampling of the posters for inclusion with a digital exhibit.

Professor Weeks’ research proposal, The Extended Specimen Project, seeks to explore the extended specimen concept in relation to the curation of natural history collections using the methods of digital scholarship by focusing on an orphaned research collection recently acquired the University Herbarium. The collection, amassed over 40 years by a professor at Virginia’s Lord Fairfax Community College, contains 20,000 herbarium specimens and 18 collection notebooks of significant historical and scientific value for understanding the flora of Virginia and its exploration in the late 20th century. Professor Weeks’ project has two main goals: 1) creating a digital resource of the notebooks (which will be accessioned within the Libraries) and 2) cross-linking the digital images of the notebook entries with the growing database of herbarium specimens, with the assistance of DiSC. Professor Weeks’ also intends to publish and present on her findings.

Zenelis commented, “It is a delight each year to see Mason faculty’s creative proposals to use, build upon, and expand the Libraries’ collections. I am pleased to support the review committee’s endorsement of Professor Huneke’s and Professor Weeks’ projects, with their mix of archival and digital exploration. We look forward to the results of their research projects.”

Professors Huneke and Weeks will present on the outcomes of their projects in spring of 2022 at the annual Fenwick Fellow Lecture hosted by the University Libraries.

About the Fenwick Fellowship: The Fenwick Fellowship is awarded annually to one or two Mason tenured, tenure-track, or multi-year appointment term faculty members to pursue a research project that uses and enhances the University Libraries’ resources while advancing knowledge in their fields. The winning proposals are recommended to the Dean of Libraries and University Librarian by a six-member selection committee including three instructional faculty members and three librarians, with one of the Associate University Librarians serving as administrative coordinator. The recipients are provided with a fully equipped and furnished research office in Fenwick Library and an award of $5,000 to support the recipient’s research project. The term for the fellowship is one academic year.

The Office of the Dean of Libraries and University Librarian is looking for three instructional faculty, including former Fenwick Fellows, to evaluate the 2020 Fenwick Fellowship proposals this summer. The exact time frame will be determined once the review committee is formed; however, the goal is that the Fellow selection process be completed by the first week in August. Ideally, we seek individuals from the university’s various schools and colleges (especially those that have been under-represented on the panel in the past), to work alongside three librarian evaluators.

The Fenwick Fellowship is awarded annually to a Mason faculty member to pursue a research project that uses and enhances the University Libraries’ resources while advancing knowledge in his/her field. Up to two Fellowships of $5,000 each may be awarded for research materials and assistance; program guidelines include funding for a second fellowship for a project proposal that specifically aligns with the Libraries’ initiatives in the area of digital scholarship.

Judging proposals will not take up much of your time. This year faculty members are requested to review the applications and then virtually attend or call into a meeting lasting no more than one hour to choose the winning proposal(s). Please contact your subject specialist librarian if you would like to be considered or if you have any questions.

Our annual issue of The Libraries at Mason magazine is now available. Special features include our Oral History Program and partnership with the Mason Osher Lifelong Learning Institute; faculty research endeavours; and our inaugural Artist-in-Residence program. We hope you enjoy this issue!

Dean of Libraries and University Librarian John G. Zenelis is pleased to announce the selection of Katrin B. Anacker, Associate Professor at Mason’s Schar School of Policy and Government, as the 2019-20 Fenwick Fellow.

Professor Anacker’s research proposal, Opening up the Suburbs: The Case of Reston, Virginia, received the enthusiastic recommendation of the members of the Fenwick Fellow Selection Committee. The project, utilizing a case study approach to examine Reston over the past five decades, will draw on three strands of suburban literature – planned communities, race and real estate, and social justice – and explore the questions: How and why did Robert E. Simon open up Reston? What challenges did he face in doing so and how did he overcome them?

Zenelis commented, “I am delighted to support the committee’s endorsement of Professor Anacker’s study. In an age of digital exploration, the use of archival and primary sources in substantive, groundbreaking research cannot be ignored or understated. We look forward to having Professor Anacker here in our Special Collections Research Center and seeing what she uncovers.”

Professor Anacker will present the results of her work in spring 2021 at the annual Fenwick Fellow Lecture hosted by the University Libraries.

ABOUT THE FENWICK FELLOWSHIP: The Fenwick Fellowship is awarded annually to one or two Mason tenured, tenure-track, or multi-year appointment term faculty members to pursue a research project that uses and enhances the University Libraries’ resources while advancing knowledge in their fields. The winning proposals are recommended to the Dean of Libraries and University Librarian by a six-member selection committee including three instructional faculty members and three librarians, with one of the Associate University Librarians serving as administrative coordinator. The recipients are provided with a fully equipped and furnished research office in Fenwick Library and an award of $5,000 to support the recipient’s research project. The terms for this year’s Fellow begins on August 26, 2019 and will end on August 7, 2020. 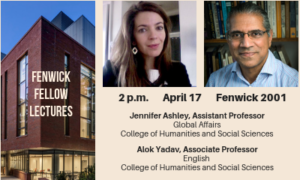 All are invited to join us on Wednesday, April 17 at 2 p.m. in Fenwick 2001 for our annual Fenwick Fellow Lecture. This year’s lecture features our 2017-18 fellows: Jennifer Ashley, Assistant Professor of Global Affairs, College of Humanities and Social Sciences; and Alok Yadav, Associate Professor of English, College of Humanities and Social Sciences. Professors Ashley and Yadav will discuss their research and updates on the projects they undertook over the course of their fellowship year, as well as their thoughts on the digital tools used in their explorations and research. A summary of each of their lecture topics follows.

“The Chilean Plebiscite and the Power to be Affected” by Jennifer Ashley: Plebiscites and referendums have played central roles in the political life of Latin America and Europe during the last few years. As I watch these political scenarios unfold around the world, I ask: What makes a campaign successful? How do media representations frame our understanding of these political processes in the moment in which they are happening, and how do they help shape our memory of these events years later? I explore these questions in a digital humanities project that takes as a case study the 1988 Chilean plebiscite. In this plebiscite, a “YES” vote meant eight more years of Pinochet in power, and a “NO” vote expressed a desire for the return to democratic elections the following year. On October 5, 1988, following an intensification of protests, a long process of political coalition building, and a well-executed television campaign, 54.71% of the Chilean population voted to end the dictatorship. With a slogan of “joy is on its way”, one of the most significant characteristics of Chile’s “NO” campaign was its promise of the good life to come. Drawing on fifty interviews with Chileans of different ages and political perspectives, I focus on this plebiscite campaign as a means of reflecting on the importance of affect and, in particular, the power to be affected in shaping political life.

“Anthologies of African American Writing: Literary History and Digital Scholarship: A Modest Proposal” by Alok Yadav: There’s been much interest in recent years about the new kinds of scholarship in literary studies made possible by digital resources and digital tools. There are also, however, possibilities for the renovation of older kinds of scholarship through the use of digital media. In this talk, I’ll present work I’ve been doing on a digital project that seeks to compile a comprehensive bibliography, index, and reception history of anthologies of African American writing in order to provide the basis for a range of literary historical investigations of African American culture. Questions about the circulation and status of particular authors and works, about the framing and interpretation of African American literature, about canons and canon-formation, and about anthologies themselves as a particular kind of text can all be pursued more effectively if adequate scholarly reference works exist to facilitate such inquiries. This project seeks to develop one such essential resource, using a digital platform to make the project possible and more useful for users. My talk will provide a progress report on the project and a discussion of how digital tools can help advance literary historical scholarship, not by seeking out brave new worlds of inquiry, but by helping us to address existing topics and terrains more effectively.

About the 2017-18 Fellows: Jennifer Ashley is a Term Assistant Professor of Global Affairs at George Mason University. She has a Ph.D. in Anthropology from Brown University. Her work focuses on media and political subjectivity, and has been published in journals such as American Ethnologist, Popular Communication, and Television & New Media. Alok Yadav is an Associate Professor in the English department at George Mason University, where he teaches courses on eighteenth-century British literature and on various topics in literary research, literary analysis, and literary theory. His first book was titled Before the Empire of English: Literature, Provinciality, and Nationalism in Eighteenth-Century Britain (2004). He has been working, slowly, on a project on political criticism of literature focused on Rudyard Kipling’s Kim – a project that involves a bit of a stretch for a dix-huitiémiste, since Kim was published in 1901. His current project on Anthologies of African American Writing involves a further stretch, in at least a couple of directions.

About the Fenwick Fellows Program: The Fenwick Fellowship is awarded annually to Mason faculty member(s) to pursue research project(s) that use and enhance the University Libraries’ resources while advancing knowledge in the faculty members’ field. Applications for the 2019-2020 fellowship are currently being accepted; the deadline is Monday, May 6, 2019.