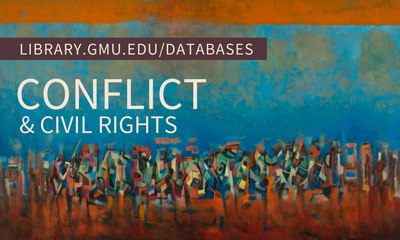 Explore the life and times of struggle, conflict and change in North America, through first-person documentation from those who lived and made history in the 19th and 20th centuries. Use your Mason NetID to examine diaries, letters, books and records of those who shaped history – they’re just a click away. Step back in time using these searchable archives to expolre a wide range of issues from immigration, African American studies, elections, labor, history, political science, social behavior, women’s studies and more.

American Indian Movement and Native American Radicalism
American Indian Movement (AIM) database documents a time of continuing social change and protest (1968-1979). The radical approach AIM adopted was based on its leaders’ perceptions that early Indian advocacy had failed to achieve any tangible results through lobbying activities with Congress and state legislatures. The digitized FBI library files document the evolution of the organization’s social protest as well as the development of Native American radicalism.

Women & Social Movements in the U.S.
The history of women in social movements in the U.S. between 1600 and 2000 is chronicled by the works of 2,600 primary authors. Additionally, the database contains scholarly essays from leading contemporary historians which illuminate key historical issues and provide entry points for accessing digitized materials such as books, films, web site reviews, news from the archives as well as teaching tools for women’s studies and women’s history. The collection continues to grow with two new issues of peer-reviewed work released annually.